Things get smarter these days and ovens are not an exemption. The Anova Precision Oven is one of the smart ovens that people have been looking into recently.

The Anova Precision Oven is a stylish and interesting appliance for home cooks who truly want to geek out. As a chef, I would really like to check out this oven and perhaps suggest it to other cooks.

But before I give any recommendations, I tried the Anova Precision oven first to have a glimpse of what it offers. I have written this review to help you figure out if this oven is worth buying for you or not. I have considered the following factors for this oven review:

If you’re not experienced with sous vide cooking or are used to preparing your meals with a single button press, you’ll most certainly encounter a learning curve. However, for those who are interested in kitchen science, the Anova Precision Oven will not disappoint.

How Does Anova Precision Oven Work?

This oven is marketed by Anova as a “combi oven,” which is industry jargon for an oven that enables you to regulate not only temperature but also humidity.

The Anova Precision Oven’s steam and sous vide capabilities, both of which rely on water, set it apart from other countertop models.

If you are not familiar with sous vide, it is the process that launched Anova’s original Precision Cooker. This method relies on exact temperature control, which ordinary ovens lack. Sous vide gadgets, such as Anova’s Precision Cooker, would traditionally get you there by immersing vacuum-sealed ingredients in a circulating bath of carefully heated water.

There is a 1.3-gallon water tank on the oven’s side that holds enough water for up to 24 hours of steam cooking. Anova suggests using distilled water to reduce the number of times you need to do descaling maintenance.

The water tank detaches simply for refill and cleaning. This is a good thing because this oven is quite large.

As mentioned, this oven has sous vide and steam functions which is not commonly found in standard ovens.

With choices for both wet and dry sous vide, the Anova Precision Oven simulates this type of environment inside the oven chamber. The dry sous vide mode maintains a low, exact temperature without adding any steam, whereas wet sous vide require you to set the steam to 100%. 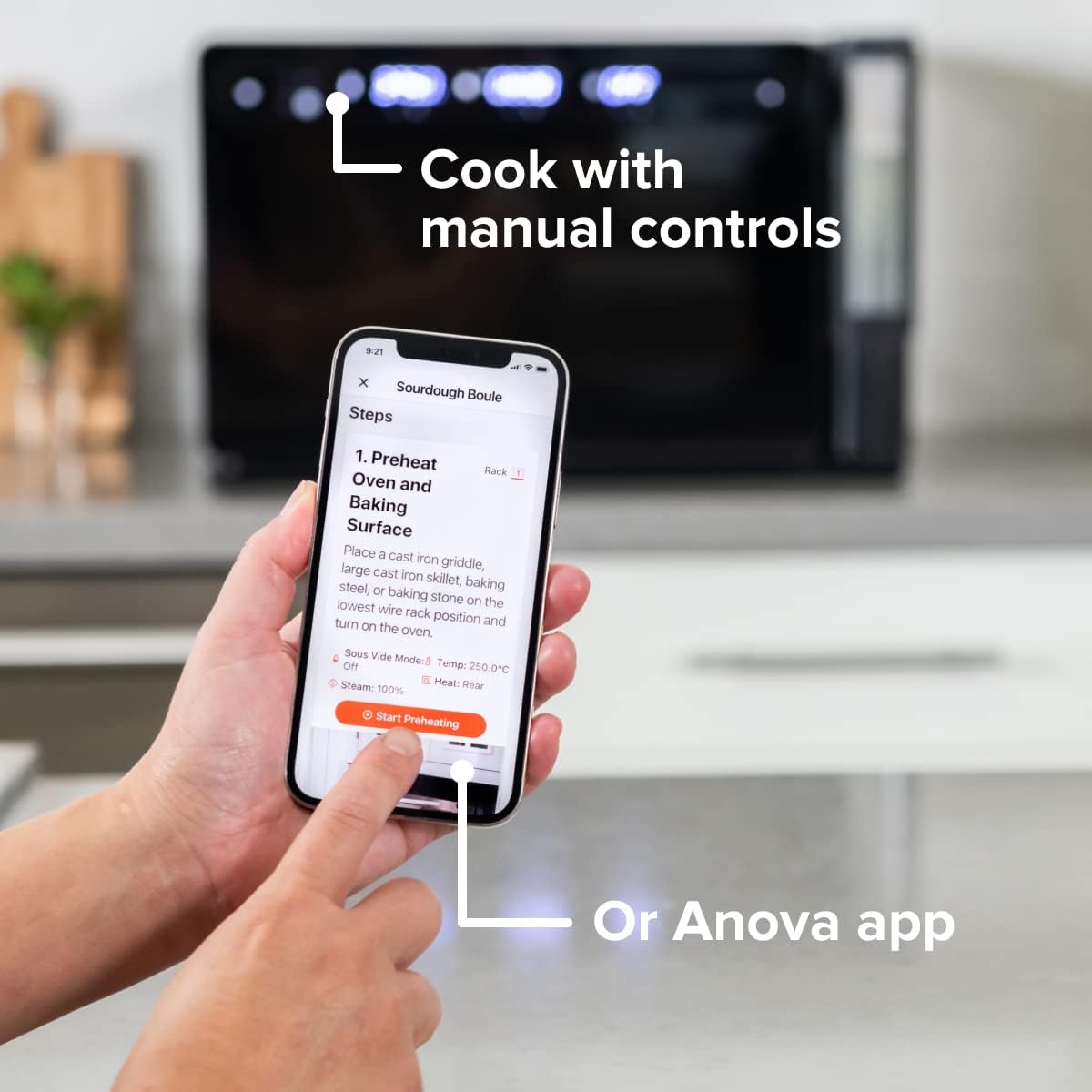 The oven itself has a contemporary countertop design with a touchscreen display integrated into the handle and a tempered glass door. If you aren’t using the Anova Oven app to control the oven, you’ll configure the temperature, time, steam level, heating elements, and cooking mode there.

While you may ask Google Assistant to “preheat the oven to 350 degrees” after connecting Anova to it, you are unable to alter the settings for the steam, sous vide, or heating elements.

One time, I forgot that the default setting for the voice integration was the top burner rather than the back, so I used it to preheat the oven for muffins. I left the oven as I have something to do. The muffins ended up quite done inside and had a charred top.

Additionally, Anova has an Alexa feature that also allows you to use voice commands to pre-heat the oven. Even so, I believe you’ll be much better off using the Anova Oven app or choosing your settings on the handle display for the remote control.

A sheet pan, a temperature probe, and two wire racks are all included with the oven.

The oven exterior measures 22.4 x 17.7 x 14.1 inches while the interior measures 16.9 x 12.4 x 10 inches. You get a substantial interior capacity of 1.2 cubic feet as a result, but I discovered that it also took up a lot of room in my typical-sized kitchen.

The oven app is compatible with both iOs and Android with wifi connectivity of 802.11 b/g/n 2.4 GHz.

My Experience with Anova Precision Oven

Anova does not really emphasize its support for voice assistants. The true smarts of this system are found in the smartphone interface and oven sensors. One feature I adore about the app is how many recipes you can go through.

You can play the first stage of a recipe after selecting one. Usually, the oven needs to be heated up first. When the preheating is finished, the oven will let you know that it’s time to put your meal inside. If there are multiple phases, the oven will automatically move on to the next one when cooking is complete.

However, only Celsius is used throughout every recipe on the app and online. You must do the conversion yourself if you choose to cook in Fahrenheit. Furthermore, you must hold the thermometer symbol for 5 seconds if you wish to change the oven’s measurement system from Celsius to Fahrenheit.

I prepared a variety of foods in the Anova Precision Oven using different modes. Some of these are from the useful “First Cooks” app for the Anova Oven. The following app recipes I tested:

The results of the recipes vary, but the chicken I made was the best so far.

Cleaning the Anova Precision Oven is essentially the same as cleaning a standard oven. According to the website, you should heat the oven to 140°F with 100% steam before turning it off and applying oven cleanser. The grease in the oven’s back didn’t appear to be impacted by the initial steam heating.

Remember that you might want to let the Anova Precision Oven cool down a bit after cooking in it before using it to spray anything.

Shut the oven door before cleaning the oven, then follow the time instructions of the oven cleaner. To clear away any fumes, heat the oven to 300°F with 100% steam. You might remove the cleanser you may have first missed by wiping off the steam once the oven had cooled.

This smart oven is so versatile. You can make fall-apart tender duck legs, crispy bread boules, some of the greatest roasted potatoes you’ve ever had, and fall-apart crusty bread with the Anova Precision Oven.

Steam, convection, and sous vide are some of the oven’s specialty settings that function effectively and provide a lot more variety than a standard oven. The big size of the oven is a benefit because it can fit whole chickens and baguettes. It heats up rapidly and has a handy, user-friendly built-in thermometer. This is a fantastic oven that fulfills all of its guarantees.

The bagless sous vide feature of the Anova Precision Oven is remarkable. Competitors of Anova have a sous vide feature, however, the food must still be sealed in a plastic bag before cooking. Apart from that, this oven doesn’t really differ much from other combi ovens available on the market.

It takes time and commitment to master the Anova oven. You can only use recipes created specifically for this oven until you have a lot of experience and have experimented with it.

Even if you are an experienced cook, you should probably stick to recipes created for this appliance when using special settings like sous vide. It takes a little getting used to using the oven’s front buttons and app connectivity. However, once you master them, the oven performs admirably.

The main issue I have with Anova is that there isn’t enough instruction provided to learn how to use the oven; instead, you have to learn by trial and error, which not all home chefs may want to do, but hey, maybe that’s you!

This combi oven is clearly not for beginners, and Anova customers frequently claim that it’s for seasoned cooks who want to be restaurant chefs at home.

The Anova needs to be adjusted to make it easier to switch between Celsius and Fahrenheit, and an update to the user guide is necessary. It also needs to iron out its quirks, most importantly the oven’s fluctuating temperatures, which are absurd for an appliance that’s heavily marketed as “precision.”

The Anova Precision Oven could theoretically take the place of numerous compact kitchen equipment, including an air fryer, sous vide cooker, rice cooker, or toaster oven. But I don’t know where you would keep this oven if your kitchen is small.

We use cookies on our website to give you the most relevant experience by remembering your preferences and repeat visits. By clicking “Accept”, you consent to the use of ALL the cookies.
Do not sell my personal information.
Cookie SettingsAccept
Manage consent

This website uses cookies to improve your experience while you navigate through the website. Out of these, the cookies that are categorized as necessary are stored on your browser as they are essential for the working of basic functionalities of the website. We also use third-party cookies that help us analyze and understand how you use this website. These cookies will be stored in your browser only with your consent. You also have the option to opt-out of these cookies. But opting out of some of these cookies may affect your browsing experience.
Necessary Always Enabled
Necessary cookies are absolutely essential for the website to function properly. These cookies ensure basic functionalities and security features of the website, anonymously.
Functional
Functional cookies help to perform certain functionalities like sharing the content of the website on social media platforms, collect feedbacks, and other third-party features.
Performance
Performance cookies are used to understand and analyze the key performance indexes of the website which helps in delivering a better user experience for the visitors.
Analytics
Analytical cookies are used to understand how visitors interact with the website. These cookies help provide information on metrics the number of visitors, bounce rate, traffic source, etc.
Advertisement
Advertisement cookies are used to provide visitors with relevant ads and marketing campaigns. These cookies track visitors across websites and collect information to provide customized ads.
Others
Other uncategorized cookies are those that are being analyzed and have not been classified into a category as yet.
SAVE & ACCEPT